What ever happens to the bracelet girls?

“Fatima, when are you getting married?” I asked 14 year old Fatima. Fatima is one of the bracelet girls who plies her colourful wares to tourists laying stretched out on sunbeds, baking themselves red-raw under the hot Egyptian sun along the beachside promenade of Dahab. Not that I expected her to get married any time soon, it’s just a little private joke we have.

“In a couple of years” she replies, “and what about you?”

“I already am, you know that”

“Oh yes, to that skinny man. I don’t know how you sleep with him. You are bigger than him” – she replied, with a cheeky glint in her eye.

“He goes on top” I casually answered, waiting for my reply to sink in. Her friend laughed, she understood, Fatima was not so fast on the uptake this time and wrinkled her brow.  Her friend translated and then they both giggled. 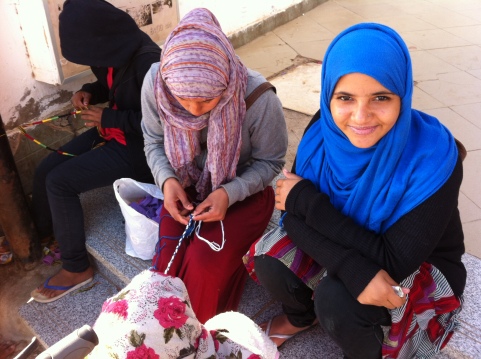 It’s not rude to talk like this with them, as they are candid and open themselves, and often say rude things to me. So you have to get one in when you can. These are the bracelet girls of Dahab: they are a breed of wild, free-spirited girls, with black hair that has been sun-bleached to a shade of light brown hair, and who spend their days going from beach cafe to beach cafe trying to sell their handmade cotton “friendship bracelets” to these unsuspecting foreign tourists. Some of them are dressed like barefoot urchins, in old clothes, and their sweet smiles and big eyes are enough to melt your heart into parting just the le5 (about USD1) for a bracelet. Some of the older girls have been around for a while and know how to talk the talk, wear nicer clothes, and “work” their “clients”.

One of cheeky Fatima’s selling lines is “I don’t sell anything today, please buy one, or my mother, she will beat me”. Which is a load of crap, of course. However it does often makes a sale. Usually as the bracelet girls get older, they disappear off the street, as they need to be kept away from the perverted gaze of men when they develop breasts, which is when they    start to wear a headscarf or “hijab”.

Once I asked Fatima what happened to little Mona, another bracelet girl, I hadn’t seen her in a while. “Is it because she has boobs now?” I inquired. “No”, Fatima said, “it’s because she has an ass”. “Ah”. But then one day I did see Mona. She was wearing a headscarf and was behaving very ladylike. Mona was a little chubby, and had very bleached, dry, straight and whispy wild hair. I loved the freedom that she exuded. Now this was not the Mona I knew, the wild, free and cheeky monkey. Things had changed, her culture demanded she become respectable so as to find a decent husband. I asked her where she had been, if she was still selling bracelets “Sometimes”, she said, “when my father is not home”. “Oh, and you mother does not mind?,” “No”. 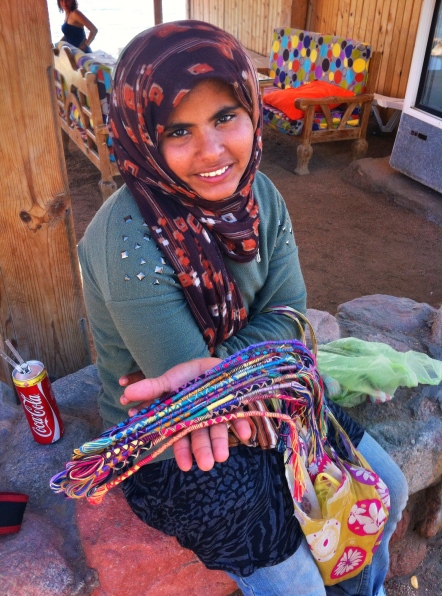 Such is the life of these girls, ranging in age from 5 year old barefoot ragamuffins to teenage, scarved and trendy young girls. The one huge benefit of selling bracelets is that they do learn to speak other languages fluently, especially English. They usually start out with only a couple of sentences, like “Buy one!” said in such a demanding way it is enough to put you OFF buying one, and “Give me dis!” pointing to your can of coke or something you have that they want. Thank God it improves after that!

Most of my neighbours are ex bracelet girls, married with children and in their 30s now. They sometimes reminisce about the old days, when they used to sit with the tourists in cafes and were given drinks, food and often gifts when the tourists left. “Those were the best days of my life” they say. Now they are confined to their neighbourhood, keeping off the main roads and out of view of men, looking after the children and attending household chores. They are happy to still have their English so that they can communicate with passing tourists in the street. This gives them a chance to do some business -help them find flats, sell them Bedouin bread etc, because once you stop selling bracelets, there is very little a Bedouin woman can do to have some income of her own.

If you live in Dahab, you get to know the all the regular bracelet girls, as they each have their patch. When they get boobs and suddenly disappear off the streets it is quite strange to not have any contact with them anymore – you even miss their mischievous faces. If you are lucky, you might know where they live, if not, you may never see them again.

← 7 good reasons to drink Gin
Why Haven’t I heard of Kerala? →