Hiking 200km through the desert: the Sinai Trail – part 1 – Anticipation

You know that feeling of needing a soul-stirring adventure? A little challenge to get your pulse up and give you that “alive feeling” again? That was me, stuck in my office a few months back. Bored and flicking through Facebook I found something that rang my bell: the opportunity to hike 200km through the Sinai desert from the Red Sea coastal town of Nuweiba to St Katherines village in the Sinai mountains in 12 days. Yup, it had my name written all over it! It attracted me on so many levels: the freedom of the desert, the simple Bedouin desert life (we would be accompanied by Bedouin guides), not to mention the challenge both mentally and physically. It would also be a change for me not to be organizing and leading the group, since that is what I do with Venus Adventures  – I would just be one of the “sheep”,  a mere participant, obeying orders and operating on a need-to-know basis. Bliss! Oh and not to mention the fact my 50th birthday fell on one of the days of the hike – I wanted to do something extraordinary as I had when I turned 40 (I climbed Kilimanjaro and also went to a  music festival in the desert 70kms from Timbuktu).

The Sinai Trail is Egypt’s first long distance hiking trail. Our group would be the first to hike this newly opened trail. Running some 200km from the Gulf of Aqaba to the highlands of St Katherine – the so-called ‘Roof of Egypt – it connects a number of old trade, travel and pilgrimage routes to pass through one of the Middle East’s most iconic wildernesses. People have followed these old ways of the Sinai for many centuries, en route between Africa and Asia; today, the Sinai Trail preserves this ancient tradition of movement, allowing modern hikers to make the same journey. The Sinai Trail launched in late 2015, following a year of development. It is one of several new locally built hiking trails in the Middle East – others include the Jordan Trail and the Palestinian Masar Ibrahim al Khalil – that are helping to boost local hiking tourism. The Sinai Trail aims to offer hikers a world class hiking route, whilst supporting the Sinai and its communities. Three Bedouin tribes are involved in the Sinai Trail project; namely, the Tarabin, Muzeina and Jebeleya.

This fantastic short but powerful video gives you an idea of what it means to the local Bedouins.

So what next?  I am a pretty fit person and stay active on a regular basis, but there is nothing like having a goal to give you some incentive to push yourself a bit more. And so over the next couple of months in Switzerland I went for a hike at every opportunity. Once I got to Egypt I did a couple of 3-day hiking missions out in the desert to test gear and stretch my legs. I also bought a selfie-stick for the upcoming mission (never thought I would see the day)  – and I hate to admit….I quite like it!

Enjoying being in the pictures, with my new friend, the selfie-stick! Oh, and Amriya of course

Ben Hoffler is the Englishman behind the organization of the first team to do the desert crossing, and was instrumental in our selection. I met him once on a dark evening at a camp in St Katherines village a couple of years back whilst swapping stories over a cup of sugary Bedouin tea. Our group is a mixed bunch of Egyptians and foreigners. A lot of Egyptians applied to be in the 15 member team, but after a couple of  “test hikes”, the wheat was sorted from the chafe. This isn’t a stroll in the park after all. You need fitness, stamina, a good attitude and, for the first hike, it’s a plus if you have some sort of other credential to help market this trip to the world. Since I work in tourism, I got a big tick.

Meeting the Team through email

I was interested in the challenge of this hike on a physical level, a mental level, but also on a group dynamic level. I love observing group dynamics, but this time I was going to be in the mix. It was going to be a mirror to myself as well. Group dynamics are fascinating and unpredictable, especially in stressful/challenging situations. Why do you think the program Big Brother was so successful? Take a group of people that don’t know each other, add different cultures, sexes, opinions and chuck them into the desert for a few days and see what happens. Stay tuned, folks!

Ben got us to introduce ourselves via email. There were some interesting characters to say the least…here are a couple:

There were some funny ones: I am XX (name removed) i am an egyptian from 3 years ago I wasn’t interested in any kind of fitness training my best record was running a full minute (don’t want to brag or anything) then my friend invited me to the gym I started working out and do some running in the weekend then heard about a trip to mousa mountain I always wanted to climb mountains I see on the road to sharm el sheikh back then I thought it was a very serious decision 😀 after reaching the top I was very happy then I started searching about trekking in sinai and found a lot of great people and places I always wanted to see I am very excited about the sinai trail and look forward to seeing you all in sinai

And there were some serious ones: I am XX, Egypt. I have a BA in English literature from the Faculty of Arts, Alexandria University ,came tops of my batch and worked as a demonstrator there for several years. I was then awarded a Fulbright Scholarship and went to study for my M.A. in English and Comparative Literature at Columbia University in New York City. Upon my return to Egypt, I decided I had too free a soul to work for the university, so I resigned my staff position. I worked several other things throughout my life before moving to NYC, among which was being an executive project manager of a media-based project with Search for Common Ground, UN-affiliated University for Peace and SALAM Institute for Peace and Justice. I led a team of 11 field researchers. Together we held focus groups in 3 Egyptian governorates covering urban/rural; educated/illiterate; classy/suburban districts; female/male; youth/old, i.e. most demographic strata of the Egyptian Society to measure via qualitative and quantitative data analysis the impact of media on implementing a culture of peace and conflict resolution in Egypt.Fast forward, am now a certified interpreter and translator in 6 languages. I learnt 12 languages and are my first passion, and am currently studying filmmaking at the French University in Cairo…..
-that email didn’t finish there, the list went on and on!

A few days before I left Switzerland for Egypt I wrote and asked Ben if there was anything in particular I should bring. I just thought Ben assumed we all were experienced hikers and would know what to take as I hadn’t received anything from him. Besides, the Bedouins are well-known for last minute organization and small miracles, so I thought we must be flying by the seat of our pants, Bedouin-style. Turns out he forgot to send me the gear list. Thank God I had asked, because you should have seen the list! I couldn’t help but think “I bet the Bedouins will just be wearing their white, cotton dresses and a pair of sandals”. Yes, I know the weather can change suddenly and unexpectedly, and I know there were very little opportunities to wash…but still?! 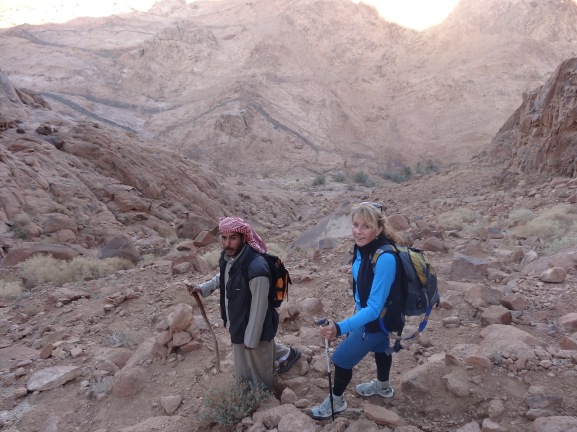 Me in all my outdoor gear, Mohamed in his cotton dress and sandals….

I decided amongst myself that all that stuff wasn’t really necessary. As long as I was warm that was the main thing, and maintained hygiene so as not to stink like hell, what could go wrong? It didn’t matter if I did not have all that expensive outdoor gear, I was also going to wear some old cotton pants, some old t-shirts and just chuck them at the end. Although when I found out there might be journalists on the trip, it did cross my mind for a minute that I did not want to look like a beggar lost in the desert….! But then I am not out to impress anyone, and I know I will be comfortable/safe in the clothing I am taking, I have tested it before in the mountains. I am not an idiot. Not yet anyway.

An old Bedouin woman in the mountains inspects my weird shoes. She said she was just looking for sharp objects inside

The excitement and anticipation to do the hike grew when it won a prestigious award in the category of Best New Tourism Project awarded by the British Guild of Travel Writers.

At the last minute one of the Bedouin Sheikhs was given a visa to go to the UK and accept the award, a very proud moment for the Bedouins, Ben Hoffler, and a privilege for us to be the first group to hike it! The hike begins 28 November 2016, in a week….stay tuned for the next episode of Big Brother in the Desert!

Camping on the coast, Bedouin style. No tents, no sleeping bags, no thermarests. Just a rug and a blanket. The simple life…

OLD BEDOUIN PROVERB: “CHOOSE YOUR COMPANIONS BEFORE YOU CHOOSE YOUR ROUTE”